WHAT DO YOU LOSE IN SWEAT?


We all sweat, and we all know that sweat contains salt, but it also contains a number of other substances too. Here’s the list:

The primary reason we sweat is to get water on to the skin which quickly evaporates taking heat energy with it. This causes us to cool down.

The sodium in salt is key to fluid movement and balance in the body and it is thought that having salt in sweat helps get the water out of the body through the skin.

Potassium, calcium and magnesium are probably the most well known electrolytes found in sweat. They help with a number of different processes in the body - luckily only small amounts are found in sweat.

It’s normal to find small amounts of fat and also protein in sweat. Where science is still trying to figure out why, one group thinks they may work to prevent bacterial skin infections.

There are waste products showing that sweat also seems to have a detoxifying effect too. They can also make sweat smell pretty bad.


THE IMPACT ON ATHLETIC PERFORMANCE


A few of these sweat ingredients you are obviously happy to lose, but for others like water, losing too much may have a negative impact on athletic performance. In fact, if the leading sports drink brands are to be believed, you should replace electrolytes and water as soon as possible to avoid a drop in performance.


Scientific research tells us a different story however.

So what is all the fuss about? You train, dehydrate a bit, but can still perform.


The danger to performance comes from overshooting your dehydration to a level where the lack of body water volume starts to mess with your body - from heat regulation to getting fuel to your muscles.


For this reason, getting water into the system should still be a priority, with the aim of staying between 0-2% dehydrated for optimal performance


HOW TO GET WATER INTO YOUR SYSTEM QUICKLY


Most of the water we drink passes into our bloodstream in the small intestines. This process happens in a few ways that rely on there being sodium and carbohydrates in the gut (if on an empty stomach, sodium is pumped out into the water to help the process).


To get water into your system quickly then, it helps to drink something that contains at least some sodium (salt) and carbohydrate.


The purpose of the salt and carbs isn’t to replenish, it’s to simply speed up the process so you can prevent over-dehydration and remain in the 0-2% range.


To maintain your performance when training causes you to heavily sweat, you should aim to stay between 0-2% dehydrated.


To do this, drink something with a little salt and carbohydrate in it to ensure the water enters your system quickly (We suggest sipping through training, and always drink more if you feel thirsty)


For athletes wanting help to do this we developed Hydra+, a versatile, real food based hydration drink mix. It contains the right levels of sodium and carbohydrate from natural sources to create a hypotonic drink focused on driving water into the system and avoiding drops in performance. Heal Like a Superhero Part 1: Exercise For Injury Rehab Heal Like a Superhero Part 1: Exercise For Injury Rehab

I have always had issues with the amount of unnecessary sodium in electrolyte drinks. Hydra+ has the perfect blend of electrolytes to fuel my running. I was intrigued by the concept of being 0-2% dehydrated, but reading the science behind it has sold me on Hydra+. An added bonus is that it tastes like mangoes... yum!

I believe egg protein is a very good source to help build and repair muscles. Similar to HMB the flavor isnt the greatest, need to mix with quite a bit of things to make it taste decent, no chance I could mix in a shaker with water. However, this tells me there isnt piles of filler and the quality is more than likely not compromised. I would buy again. 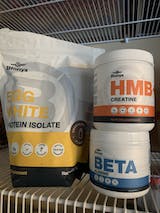 Tried Hydra+ on my long run this weekend. This tastes just like fruit juice! It is hard to find a electrolyte mix that I can stomach, but Hydra+ worked well. I'd recommend it to other runners.

I tried it because of the science driven approach to optimizing hydration & salt levels, but will keep buying it because of the flavour. You can taste the natural fruit flavour which is refreshing without being overbearing. Also appreciate that it’s made from natural ingredients.